#MeToo and Beyond: Taking the Next Step

Tropicbird Entertainment / #MeToo and Beyond: Taking the Next Step 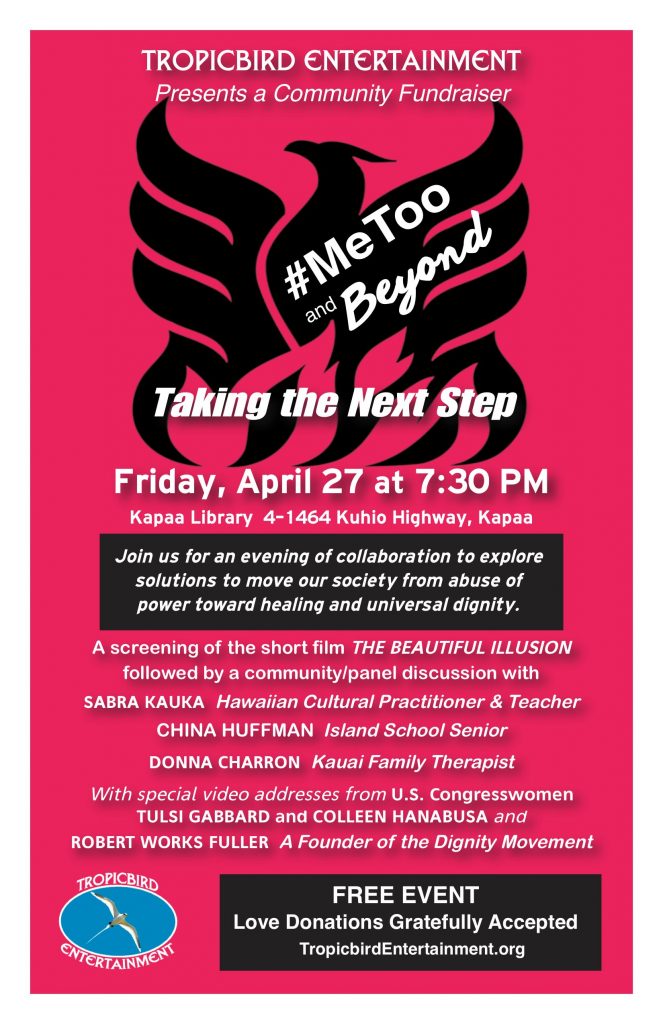 THIS IS A FREE EVENT! Tropicbird Entertainment is offering it as a gift to the community. Love donations gratefully accepted.

The reason for this change is that our keynote speaker Robert Works Fuller has had a medical emergency, which landed him in the hospital and unable to fly here, on his doctor’s orders. Since Robert will not be here in person we’ve decided to move to a smaller venue.

However, Robert is still committed to participating in the event through electronic media — Skype, Zoom, or video. As the days progress, we will have a better idea of what’s possible.

#MeToo and Beyond: Taking the Next Step, is a community forum and fundraiser to address the issue of sexual misconduct, abuse of power, and the ways to move our society toward healing and universal dignity.

The impetus behind this forum for societal change is Nadya Wynd, president of Tropicbird Entertainment, a non-profit theater and entertainment organization based on Kauai. In 1999, after working in the entertainment industry in Los Angeles and witnessing sexual misconduct first hand, she wrote, produced and directed The Beautiful Illusion, a powerful psychological drama, starring Delane Mathews (co-star of Dave’s World and From the Earth to the Moon) and Tyrone Power, Jr. (Cocoon and Cocoon, the Return) son of the famous star from Hollywood’s golden age.

The 33-minute, narrative film addresses the issue of the sexual exploitation of actresses, as well as the ability to forgive the seemingly unforgivable. Produced as a Screen Actors Guild experimental film, The Beautiful Illusion was an official selection of the New York and Los Angeles Independent Film Festivals and aired on PBS.

The evening starts the conversation with a screening of the film, followed by an interactive community discussion led by a panel of experts. Issues of sexual misconduct and abuse of power in the workplace, in professional relationships, and — most importantly — solutions to the problem, all will be explored.

“The event is geared to both women and men — since men suffer from the abuse of power as well,” said Wynd. “We also want to invite men to become important allies to women who have been the victims of abuse. Attendees of the event will receive the knowledge, understanding and tools to create positive change in their sphere of influence around the fundamental causes of abuse of power.”

In addition to the panelists, the forum will include special video addresses by U.S. Congresswomen Tulsi Gabbard and Colleen Hanabusa, both of whom are co-sponsors of the ME TOO Congress Act (H.R. 4396). Congresswoman Gabbard has been spearheading the move to end the culture of unwanted sexual exploitation and sexual assault in Congress, the army, universities and schools across the nation.

Sabra Kauka, one of the most influential Na Wahine Alakai (Women Leaders) of Kauai. She shares her passion for Hawaiian culture by educating keiki and kupuna as kumu of Hawaiian studies and hula at Island School and as the Kauai coordinator of Hawaiian Studies for the Department of Education.  She has also been a journalist, historian, environmentalist, anthropologist, political public information officer and dedicated activist.

China Huffman, a senior at Island School with her own #MeToo story. She will be a voice of youth on our panel. She is very excited to be able to help inspire social change around this issue.

Donna Charron, marriage and family therapist specializing in individual, couples and family therapy on Kauai. A graduate of the American School of Professional Psychology/Argosy University, she is currently serving as private practitioner working with a broad spectrum of clients, including the YWCA.

Also participating via electronic media will be Robert Works Fuller, a founder of the Dignity Movement and co-author of its handbook Dignity for All. He is an educational reformer, advisor to presidents, citizen diplomat, physicist, futurist, prolific author, former president of Oberlin College. In his book Somebodies and Nobodies, Fuller identifies rank-based abuses of power including school bullying, corporate corruption, sexual harassment, domestic violence, elder abuse, the invisible poor, racism, sexism, homophobia, ableism (disabilities), ageism and classism and gives them a name: rankism. Fuller will demonstrate how societies can overcome rankism and promote universal dignity. To learn more about this truly remarkable visionary man, you can watch a seven-minute video here, which is guaranteed to wow you. 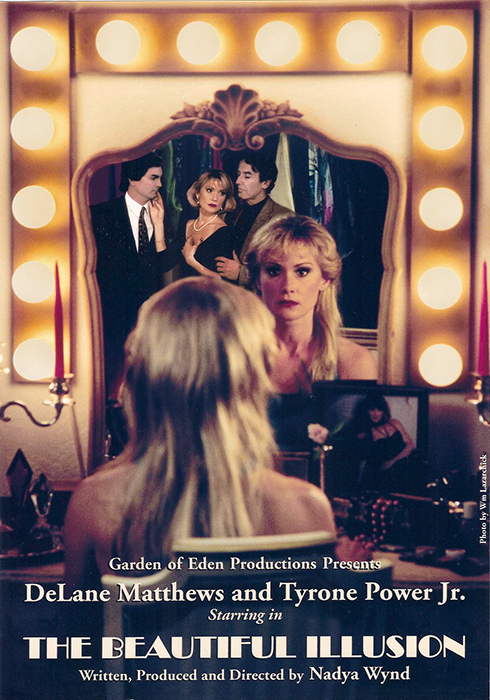 Shortly after the release of the The Beautiful Illusion in 2000, Wynd was asked to screen it in Santa Cruz, California, as a fundraiser for a sexual abuse organization. She was pleased to donate all the proceeds of the screening. “I was especially moved when several sexual abuse “survivors” thanked me for making the film and marveled at how uncannily accurate the portrayals in the film were,” she said.

“When I tried to market the film in 2000 and 2001, it was a challenge, due to the fact that about 90 percent of the positions of power in the film industry were held by men and the film seemed to make a lot of men uncomfortable,” said Wynd. “With the attention and awareness that the #MeToo movement has generated, I am very grateful that the relevance of the story and theme of The Beautiful Illusion can finally be appreciated by a wider audience.”

Wynd founded Tropicbird Entertainment in 2015 with two other women — Melissa Mojo and Laurel McGraw — with a mission to produce quality, family theater on Kauai with an emphasis on social values themes that educate, inspire and build community. Currently, the organization is fundraising to produce Nobody’s Boy, an original, family musical that offers timely messages about the value of home and family, forgiveness and reconciliation and appreciating differences in culture, religion and language.

“Our generation was the first to enter the workforce after the inception of the women’s movement in the 1960s,” said Mojo, who in 1976 was one of the first women break through the traditionally all-male barrier in the newspaper industry to work in the newsroom of the New York Daily News. “We had to learn how to navigate the patriarchy of the business world and all that came with it, including the glass ceiling and the abuse of power through sexual misconduct, intimidation and harassment.”

McGraw agrees, “It’s heartening to be present at this momentous time when all people are coming together to explore new ways to address and solve the basic human issues of dignity and respect for all.”

“This event is just the beginning,” said Wynd. “Going forward, attendees can stay involved, informed and supported with a list of resources we will provide as they leave.”

Donations for the event are tax deductible. Tropicbird Entertainment, a 501c3 non-profit organization, will be donating a portion of the proceeds from the event to the YWCA for its sexual abuse programs on Kauai. The rest will go to support theater performances that portray respect and dignity for all people.