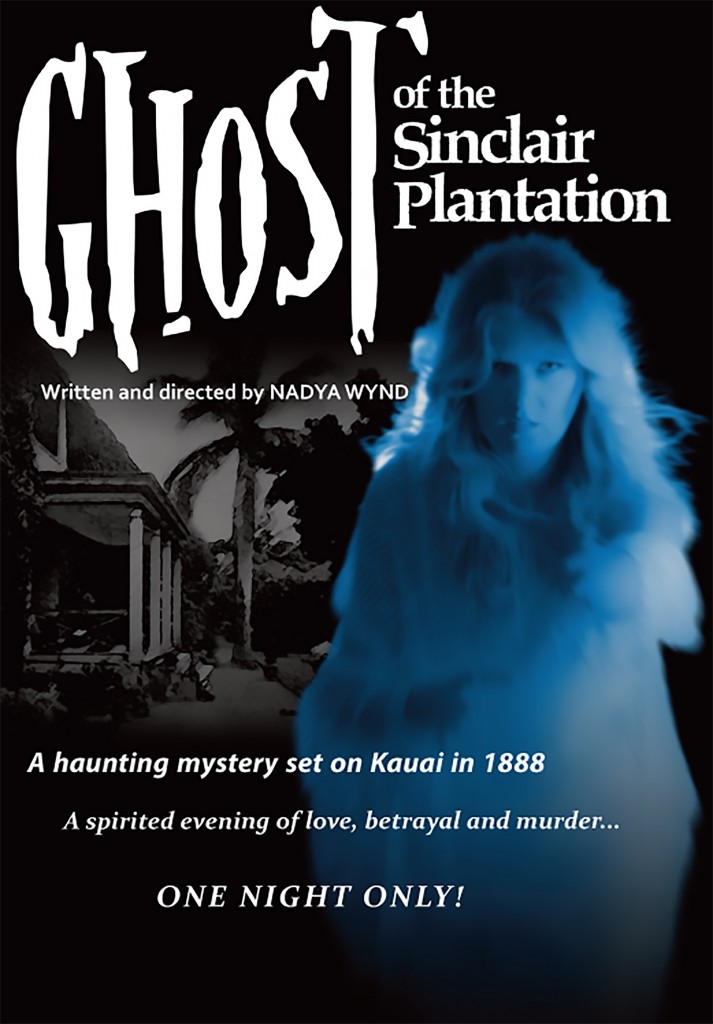 Tropicbird Entertainment presents Ghost of the Sinclair Plantation, an original murder mystery set on Kauai in 1888. This will be a dinner theater production at the Courtyard by Marriott in Kapaa on Friday, August 28 at 6:30 PM.

It’s August 1888 and folks on the Sinclair sugar plantation are knee deep in spirits — and suspicions! Plunge into the depths of the mystery as the ghost of the beautiful Beulah Sinclair haunts the stage seeking her murderer. The young, second wife of Kauai sugar plantation owner John Sinclair has been found dead on the sugar cane train tracks and it’s up to the audience to deduce who the culprit is among the plantation’s five residents.

Is it Beulah’s new husband, who lost his first wife just months before? Or is it John’s resentful spinster sister, or his rebellious grown son, Koa?  Perhaps it was Nalani, the long-time housekeeper or the high-strung plantation manager, who has a penchant for gambling and rum?  Motives abound as Sheriff Kamaka searches for clues. Beulah’s ghost rattles everyone’s nerves, while an ancient Hawaiian guardian spirit of the land weaves mystical rituals to restore the sanctity of the aina.

At the end of the show, solve the mystery and you could win an Ultimate Kauai Adventure Helicopter Tour for two with Sunshine Helicopters where you will learn about the legends and history of the island and see breathtaking views of the Na Pali Coast, Waimea Canyon, Wailua Falls and Mt. Waialeale.

Ghost of the Sinclair Plantation is written and directed by Kauai-based Nadya Wynd, an accomplished director and playwright, with extensive experience in screenwriting, acting and producing for stage and film.

Group seating is available. Reservations are required 24 hours in advance and seating is limited — so get your tickets early!

Dinner and the show will be in the Paddle Room at the Courtyard Marriott Kauai at Coconut Beach, located at 650 Aleka Loop in Kapaa. The restaurant was recently rated “best restaurant in the area” on Trip Advisor. A buffet of delectable dishes will be prepared by Executive Chef Charles Steppe, a graduate of the Culinary Institute of America and devotee of the farm-to-table concept, who has garnered acclaimed reviews from an extensive list of exceptional restaurants across the country, including New York City’s Rainbow Room and Hudson River Club. According to MarketWatch.com, Steppe is “a hotel chef worth tweeting about.”

Kauai-based Tropicbird Entertainment, a not-for-profit* organization dedicated to creating exceptional entertainment that is inspiring, educational and engaging to people of all ages.

* As a not-for-profit organization, Tropicbird Entertainment does not earn profits for its owners. All of the money earned is used in pursuing the organization’s objectives — producing quality entertainment. We are in the process of achieving tax exempt status via a 501(c)3 nonprofit fiscal sponsor.