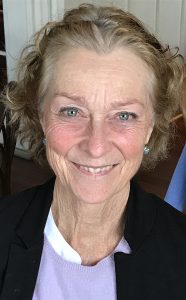 Laurel McGraw is artistic director of Tropicbird Entertainment. She has spent more than 45 years working in theater, television and film production around the world as an actor, director, set designer, set dresser, set builder, continuity and stage manager, writer and teacher.

After graduating in 1972, with a BFA from Carnegie-Mellon University, Laurel started her career in Boston, working for the Loeb Drama Center where she built sets, painted backdrops and stage managed their productions. In 1975, she moved to London to work for the Hammersmith Odeon, providing backdrop painting and stage management.

In 1977, a job opportunity took her to South Africa where she worked at Cape Town’s Space Theater doing set design, props and stage management. Laurel moved to Johannesburg two years later to work for Max Katz and Associates, where she was in charge of television set design, props and props construction. She also provided art direction, continuity and production design for the television branch of the South African Broadcasting Company. During her time in South Africa, she provided sets, props, set dressing, props construction and standby props, for Bavaria Atelier of Munich Germany, for the filming of a popular television series. Laurel also provided sets, set design, props, set dressing and standby props for a karate film Kill and Kill Again, produced jointly by New Zealand and U.S. production companies.

In 1984, she moved back to the United States and spent a year traveling across the country working as a freelance writer for the in-flight travel magazine of South African Airlines.

Family connections called Laurel to settle in Hawaii and she moved to Kauai in 1985 to raise her family. Since then she’s continued her work in set design, dressing and construction, backdrop painting and props for many productions for Island School, Kauai Community Players, Women in Theater and the Kauai Performing Arts Center, the middle and high school satellite learning program.

Laurel also developed her skills and delved into directing plays for a number of theater companies, including Art, God of Carnage and The Language Archive — for Kauai Community Players, Sister Mary Ignatius Explains It All For You and Painting Churches for Women in Theater and The Vagina Monologues for the YWCA.

Her acting credits include roles in Other People’s Money, The Vagina Monologues, Eleemosynary, All My Sons, August Osage County, Other Desert Cities and Cabaret, where she sang as Frau Schneider. In addition, Laurel has taught playwriting and scene study to students in the Kauai Performing Arts Center and improvisation for the Summer Starz program.

For the past 10 years, she has served on the board of Purple Striped Honu Theater for Kids, doing sets, props, acting and writing scripts for three plays. Laurel recently served as a cultural ambassador of world peace during a performance tour to Cuba with Kauai Voices, the island’s highly popular auditioned choral ensemble, where she is currently enjoying singing in the alto section.